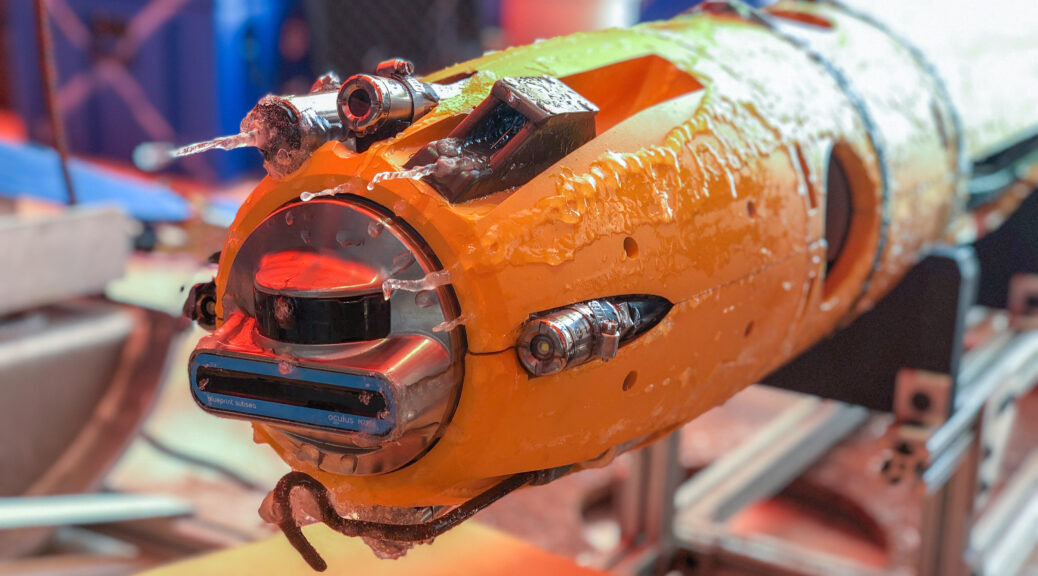 Curious about the scientific instruments Icefin has to help it do groundbreaking (and ice-breaking!) field work? From salinity and temperature readings, to seafloor imaging and sonar mapping, Icefin has a collection of instruments that help scientists look at all kinds of things under the ice.

Here, we’ll talk about Icefin’s Oculus sonar from Blueprint Subsea, which can be spotted on the nose of the vehicle in the video below, taken during a dive under sea ice near McMurdo Station in Antarctica.

Both Icefin vehicles have Oculus MD750d sonars, including when they were deployed during the 2019-2020 field season (in McMurdo Sound, as well as at Thwaites Glacier and Kamb Ice Stream). The Oculus sonar used by Icefin is a compact model by Blueprint Subsea, which allows the vehicle to monitor long, narrow boreholes, and navigate beneath the ice in precarious locations, all while using the sonar to map interesting features on the ice and seafloor interfaces, including fractures, rifts, melting, and grounding zone environments.

In the photo below, along with some icicles (which we call Icefin-icles, since they formed on Icefin), you can see a close-up of the Oculus sonar – it’s the blue and black oval-shaped device on the front of Icefin.

“The sonar was simple to integrate into our vehicle and gives us great situational awareness during our missions. The support from the Oculus team was also outstanding,” said Anthony Spears, Icefin Research Engineer. “The most outstanding experience we have had was when Blueprint was able to manufacture and deliver an Oculus sonar to us in the deep field in Antarctica in less than two weeks to ensure full data collection capabilities during a very important field season.”

But before heading out to the deep field camps, the team also spent about a month in McMurdo Sound deploying Icefin through the sea ice and swimming out below McMurdo Ice Shelf from October-November 2019. It’s easier for the team to take a few weeks getting the vehicles ready for the deep field while in reach of the resources and relative comfort of McMurdo Station. Moreover, the unique ice-ocean processes and ice environments around the area are good planetary analogs. McMurdo Ice Shelf is a smaller shelf stemming from the extreme northwestern corner of Ross Ice Shelf. By drilling through the relatively thin sea ice right at the edge, the team was able to map the base of the ice shelf, without requiring the support of a large hot water drill like at Thwaites Glacier and the Kamb Ice Stream.

In the early part of the field season, the Icefin team focused on a 4 km long section of a rift in the ice shelf that is continually active, most recently beginning a calving period in 2016. This rift has been mapped using remote sensing and GPR data from surface surveys, but no ice shelf rift has ever been mapped in detail by an underwater vehicle (though there have been some under ice mapping studies with vehicles like Autosub). Rifts are long, wide active fractures in ice shelves that fill in with marine ice and refrozen melt water, creating an “ice bridge” between the two once continuous sides of the fracture that started the rift opening. Rifts can continue to open, but be stabilized by the regrowth of ice in the rift, until ultimately the rift calves large icebergs. Using the Oculus sonar, Icefin was able to map several kilometers of the underwater landscape; part of the data is shown in the picture above. This data will help the Icefin team understand how ice base topography, circulation, and melt water affect the formation of ice in the rift, and how the rift is evolving in time.

“Forward-looking sonars are particularly valuable for understanding the scale of the environment the vehicle is operating in. With cameras we get great resolution, but range is typically limited to meters, due to how much energy lighting requires. With a sonar however, we can see tens to hundreds of meters in a wide swath. This lets us conduct mapping missions such as those under the rift. With the FLS we can see both edges of the feature and understand lengths, thickness trends, and variation in ice morphology indicative of changes in ocean properties,” said Justin Lawrence, Georgia Tech graduate student and Icefin team member.

During the 2019-2020 season, the Icefin team had equal efforts at both Thwaites Glacier and Ross Ice Shelf. In one field season, the Icefin crew had two teams, two vehicles, and two Oculus MD sonars operating at the same time, a major achievement for everyone involved! In both locations, the vehicles had to travel down narrow boreholes through about 600 meters of ice to reach the oceans below, described here. These results are currently being written up, and we’re looking forward to showing more once the papers are ready.

The Oculus sonar equipped on both icefin vehicles provided scientists with important data that will be used to better understand the nature of the Thwaites Glacier, the Ross Ice Shelf, grounding zones, and may provide insight into what ice-covered oceans on other worlds might be like. Sonars are also key parts of the navigation for underwater vehicles, and will be important for future spacecraft missions.

“The Oculus sonar has been a great addition to the Icefin platform. Not only has it performed flawlessly in the harsh Antarctic environment, it also plays a crucial role in how we navigate the under-ice environment. With no light and very little information about our surroundings we would be lost without the MD750d,” said Matt Meister, Icefin Lead Engineer.

Icefin’s work in Antarctica was funded by both NASA as part of PSTAR project RISE UP, and by NSF as part of the International Thwaites Glacier Collaboration (ITGC). Both missions were the result of massive collaborations. The Thwaites project was a collaboration with the British Antarctic Survey and made possible by the ITGC, and included an critical contribution by the British team, who drilled the borehole. On the Ross Ice Shelf, the Icefin team worked with the Antarctica New Zealand Ross Ice Shelf Programme, which is funded by New Zealand Antarctic Research Institute (NZARI), with hot water drilling funded by the Victoria University of Wellington and managed by the VUW Antarctic Research Centre’s Science Drilling Office.