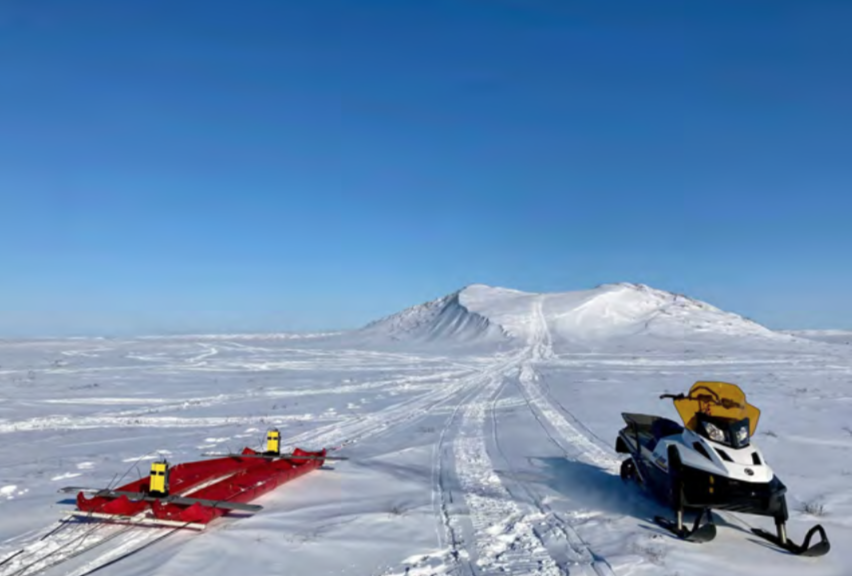 Pingo STARR is a NASA-funded program exploring ice-cored hills in the Arctic Tundra called pingos. These hills form from freezing ground water, forming a massive ice mound at the center and uplifting the permafrost. Not only are they found on Earth, but there is strong evidence that they also form on Mars and on the largest body in the asteroid belt and innermost Dwarf Planet, Ceres.

Similar physical processes may also be happening on the icy satellites. Partially because of their remote locations, little is really known about pingos even on Earth. Pingo STARR aims to change that. We’re working with a host of cutting-edge geophysical techniques to perform the most in-depth analysis of these features ever attempted here on Earth in an effort to also understand how they may be forming on other planets. What’s more – we’re assessing the kinds of techniques that both robotic missions and one day astronauts could use to detect and map water resources that could be vital for exploring Mars in particular.

This mid-season field work update from Ky Hughson and Britney Schmidt details the progress we made during our first two weeks in the field.

Since arriving in Alaska, the Pingo STARR team has been hard at work exploring the tundra and collecting an amazing geophysical dataset of our favorite ice cored hills: pingos! Prudhoe Bay has proved itself a rugged yet welcoming outpost for us to base our science operation efforts out of, and the North Slope itself is an untamed landscape of exceptional beauty and occasionally extreme weather. Thus far our first season has been a challenging but fruitful endeavor.

Just getting to the field safely in a global pandemic was a challenge the team took seriously: for months, we re-evaluated how to meet our science goals within the very real logistical constraints presented by trying to keep the team safe amid health concerns on top of the usual challenges of polar field work–wind, cold, and remote operations. Luckily, the Arctic Oilfield Hotel, our host camp here in Prudhoe Bay has taken health concerns for its staff and guests very seriously, with mandatory masks and social distancing maintained everywhere, solo rooms, safety precautions in the dining hall, and frequent safety checks. Moreover, negative Covid-19 tests within 72 hours and a minimum 14-day temperature and symptom log are required to be presented in order to get into Deadhorse, and all of the camps are checking the cards regularly. With our team able to isolate prior to deployment, test regularly during that time and with most receiving a vaccine prior to the campaign, and with rigorous attention to safety while here, we’ve been able to minimize risks to the team.

Thank YOU! We would not be here collecting this amazing data without the help of many individuals both in Atlanta and in Alaska who have helped us. The Pingo STARR team would like to explicitly thank Frederick Trotter at Georgia Tech for all of his hard work getting insurance for the trip settled out. We thank Julie and Brent and the staff at Arctic Oilfield Hotel who have been indispensable to us, helping us figure out the smoothest operations plans and making the AOH our delicious home away from home. A special recognition to Julie for her smiles and months of help and flexibility with us as we got everything sorted! We would like to thank Jerry Lee at AER for his hard work getting the rentals sorted out, and Basil, Jesse, Chuck and the team at AER in Deadhorse for being so welcoming to the team. Thank you to NASA and the Astrobiology program, and especially our program manager Mary Voytek for the honor of working again with NASA. Finally, thank you to Belal, Laura, and Greg at Georgia Tech EAS who helped us get the season sorted, and especially to Matt Meister, Dan Dichek and Kathrine Udell for their help. This has been a memorable and productive season because of all of you!

Britney Schmidt, Andy Mullen, and Roger Michaelides were the first Pingo STARR detachment to arrive in Prudhoe Bay on March 19, and were able to acquire our rental equipment, start prepping sleds and equipment for operations, and complete initial test drives down the Dalton Highway in order to select safe pull outs as bases for our initial surveys. Kynan Hughson and Enrica Quartini arrived shortly after on March 22. Now with critical mass, the team spent much of the 22nd and the 23rd preparing the capacitively-coupled resistivity (CCR) meter and ground penetrating radar (GPR) for use on our first pingo, as well as packing our sleds and trusty steeds (i.e. snowmobiles).

The highlights of the first few days were getting acquainted with our equipment partners and hosts in Prudhoe Bay, preparing for cold conditions, engineering some unconventional ways to tow our science devices, and visiting our first pingo. In order to tow the CCR and GPR on our snowmobiles the team needed to modify the lids of some of our packing crates as well as strap our cargo sleds into a couple of different configurations affectionately known as “pontoon mode” and “super-banana mode”.

In these initial days we also carefully reviewed our safety plans and prepared ourselves for cold tundra conditions. On March 23 the team carefully went over all our procedures and showed off our cold weather gear in a safety review “show-and-tell”.

On March 24 we embarked on our first pingo excursion from our operating zone at the Franklin Bluffs, roughly 60 km south of Prudhoe Bay. During this mission we traveled ~7 km west from the Franklin Bluffs to recon the ~16 m tall mature pingo near there, as well as a smaller young pingo to its northwest. We made our temporary camp at the young pingo and successfully surveyed a transect across it. The wind was low and the temperature a balmy -17 Celsius, which was a welcome reprieve for our first day out doing science. Our early radar and resistivity data imply that this hill has an icy core as well as some internal ice wedges, confirming that it is indeed a pingo! The team is already excitedly reviewing these observations to better understand the watery and icy structure of this unique hill.

Beyond majestically rising from the tundra, pingos are important indicators of groundwater and permafrost properties, as well as bellweathers for how the frozen tundra is changing in a warming climate. They may also be present on the surfaces of other planets, marking oases for both endemic life and, hopefully, water resources for future explorers.

Since our first survey the team has completed surveys across 3 different pingos using three wavelengths of radar including a multi-offset technique, the Ohm Mapper that measures conductivity and resistivity of the materials, and have completed Transient Electromagnetic
Surveys of two of the pingos. We have unfortunately also suffered (expected, but unfortunate) weather delays for several days by high arctic winds that, coupled with cold temperatures, made it unwise to work out in the exposed tundra.

Our team was joined on March 29 by its final member, Matt Siegfried, and subsequently surveyed 2 large pingos about 30 miles south of Prudhoe Bay. While the topography was challenging, we were deftly able to navigate their crenulated summits with our snowmobiles and instruments in tow. The largest of these pingos, Percy, measures nearly 18 m tall, and was last surveyed by the US geodetic surveyed in 1955! Altogether, these surveys now represent a comprehensive and comparable geophysical dataset over a wide range of pingo shapes observed in the Alaskan Arctic.

All in all, preparing and executing our 2021 field season has been quite the adventure and we’re extremely grateful to everyone on the field team and all those back down south who helped get us here. It goes without saying that 2020 and 2021 have been challenging times, but the opportunity to get out and do the work we’ve been preparing for for over a year has been an exhilarating experience.

Finally, despite our hectic schedule the team also took some time to enjoy a Northern lights show, and have been thoroughly enjoying the regular appearance of sundogs and solar halos most days. There are definitely perks to working in the Arctic. 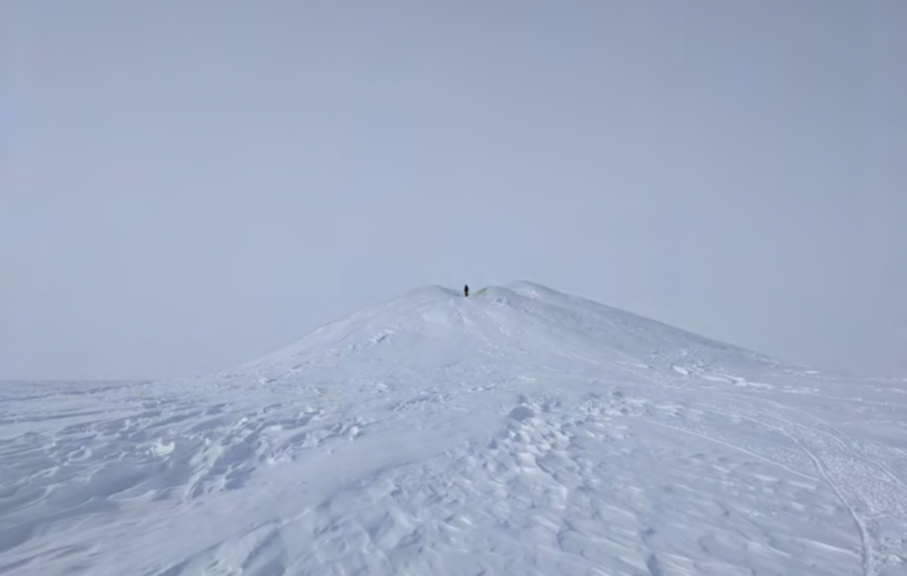 Pingo SubTerranean Aquifer Reconnaissance & Reconstruction (Pingo STARR) is a NASA- funded research & analysis program grant supported through the innovative Planetary Science and Technology for Analog Research (PSTAR) program. This program allows planetary scientists to conduct research on Earth that is forward thinking and explores our own planet in ways that address key planetary science questions, develop and/or use compelling technologies, and assess operations scenarios to inspire future planetary missions. Through these grants, our team has also been able to advance Earth science as well as synergize across NASA’s investments, and build towards a systems level understanding of planets as a whole. Our work has primarily focused on the polar regions, which have lessons important for environments across Mars, Europa and other moons, and even the asteroid belt.

Pingo STARR is a NASA-funded program exploring ice-cored hills in the Arctic Tundra called pingos. These hills form from freezing ground water, forming a massive ice mound at the center and uplifting the permafrost. Not only are they found on Earth, but there is strong evidence that they also form on Mars and on the largest body in the asteroid belt and innermost Dwarf Planet, Ceres. Similar physical processes may also be happening on the icy satellites. Partially because of their remote locations, little is really known about pingos even on Earth. Pingo STARR aims to change that. We’re working with a host of cutting-edge geophysical techniques to perform the most in-depth analysis of these features ever attempted here on Earth in an effort to also understand how they may be forming on other planets. What’s more–we’re assessing the kinds of techniques that both robotic missions and one day Astronauts could use to detect and map water resources that could be vital for exploring Mars in particular.
Pingo STARR’s key objectives are to:

The Pingo STARR Team is: